Boston Globe, January 13, 2017. For this craftsman, there is more to instruments than the sound

Boston Globe, January 13, 2017. In the musty cavern of a former Seventh-day Adventist church, drawers have labels reading “tin scraps” and “too heavy,” clamps line up in brackets on the door, and fluorescent lights flicker. You can sense the sawdust in the air.

Jeremy Adams, who builds and restores organs and harpsichords, has propped an old organ keyboard on a worktable. He had plans to recover this organ’s bellows, then discovered more problems inside.

Adams has been avid about keyboards since he was a child growing up Westwood. His family wasn’t musical, but they had a melodeon in the parlor. Young Jeremy fooled around on it, prompting his parents to get him piano lessons, and then to buy an old upright.

“I liked working the action,” Adams says. “That was my downfall.”

The old, disassembled organ in his workshop is a pedestrian instrument compared to the ones Adams builds himself, some of which are on view at the Cape Ann Museum, in Gloucester, in “Voicing the Woods: Jeremy Adams, Instrument Maker,” through Feb. 26.

During a tour of the gallery, Adams, a soft-spoken man with a dry wit, expounds on topics from the mechanics of a harpsichord to the distinctions among antique instruments from different European countries.

He pauses at a large cherry-wood harpsichord, modeled after a 1730 design of Nicolas and François Blanchet. It has a modern maritime motif: The carved stand and the brass hinges echo shapes of waves.

“It’s a wonderful wood to work with, dimensionally stable,” he says. “In England, they use oak and veneer it with mahogany. But when you make veneer, you are making it into plywood. And when you make it out of plywood, it won’t have as warm a sound.”

Adams, 76, comes from a lineage of harpsichord makers known as the Boston School, which rose up in the mid-20th century in response to an increasing demand for early music. Instrument builders such as Frank Hubbard and William Dowd aimed to make historically accurate harpsichords.

“Jeremy has always had a bit of a different view,” says music writer Josiah Fisk, who met Adams at the organ workshop of his father, Charles Fisk, where Adams worked when Josiah Fisk was a boy. “Instead of trying to understand the instrument, he’s trying to understand the aesthetics of the maker, how the maker thought. . . . He tries to look forward from the sensibility of the period.”

Harpsichords were first built in the 15th century and had their heyday in the two or three centuries that followed. They look like smaller, more slender grand pianos.

They differ from pianos on several counts: Their strings and their casings are thinner. They can have up to four sets of strings, played together or separately, each with its own tone. Their number of keys varies. A piano withstands 20 tons of tension, and requires a cast-iron plate to keep it from folding up like a dry leaf. A harpsichord needs no iron; the tension in the strings is more like one ton.

The harpsichord’s sound, more delicate than a piano’s, comes not when a hammer hits a string, but when a device called a jack shoots up and plucks it.

“I like to think of harpsichords as being made by a violin or cello maker,” says Adams. “They vibrate.”

He touches the middle C on the cherry-wood instrument, pulls a stop, and plays a sound layered with notes.

Fisk has listened to music played on this harpsichord. “It’s one of the most luxurious and richest instruments I’ve ever heard,” he says.

Adams’s childhood piano lessons led him to the Longy School of Music, where he had the chance to assist organist Melville Smith, the school’s director. “I learned a lot just turning pages and pulling stops for him,” Adams says.

Smith invited Adams to practice on the 1770 harpsichord in his office.

“I got that sound in my ear,” says Adams.

He couldn’t shake it. From school, he apprenticed in Dowd’s workshop. In 1969, Adams moved to Cape Ann and opened his own shop. He met and married his wife, Kathleen, the organist at the Annisquam Village Church, when he built a 13-stop organ for the church.

Adams builds instruments for conservatories, universities, and churches. They meet the clients’ needs, but they are also inventive. An organ he built for a church in Japan echoes the lines of a Japanese farmhouse. He thinks of himself as a metalworker and a woodworker.

But he is an artist. His playful design sense and knowledge of art is intrinsic to his instruments. One harpsichord features a roiling abstract painting by Sarah Brown inside the open lid. Another sports Jackson Pollock-like prints.

Photographs of novel instruments not in the show, alongside documentary images shot by Paul Cary Goldberg, are also on view. One particularly delicate harpsichord sits inside a graceful protective wooden armature.

Adams applies his woodworking skills to furniture, as well, some of which is on view in the museum’s Captain Elias Davis House: He’s built a lamp around an old saxophone, a small cannon that he intended to fire until he learned there would be fees and certification to use it, and a side table with supports that angle and twist.

“The top square isn’t flush with the bottom one,” he points out. “Part way through the second martini, it’s kind of fun.”

These are side projects. The design, craft, and voicing of the instruments soak up most of his time.

“It’s more than craft,” Fisk says. “He has a visual idea, a tonal idea, and a relationship to history. That is the most breathtaking thing about these instruments.”

“A lot of people look at a pipe organ, and if the case intrigues them that will fool their ears,” Adams says. “You have to look with your eyes and listen with your ears.” 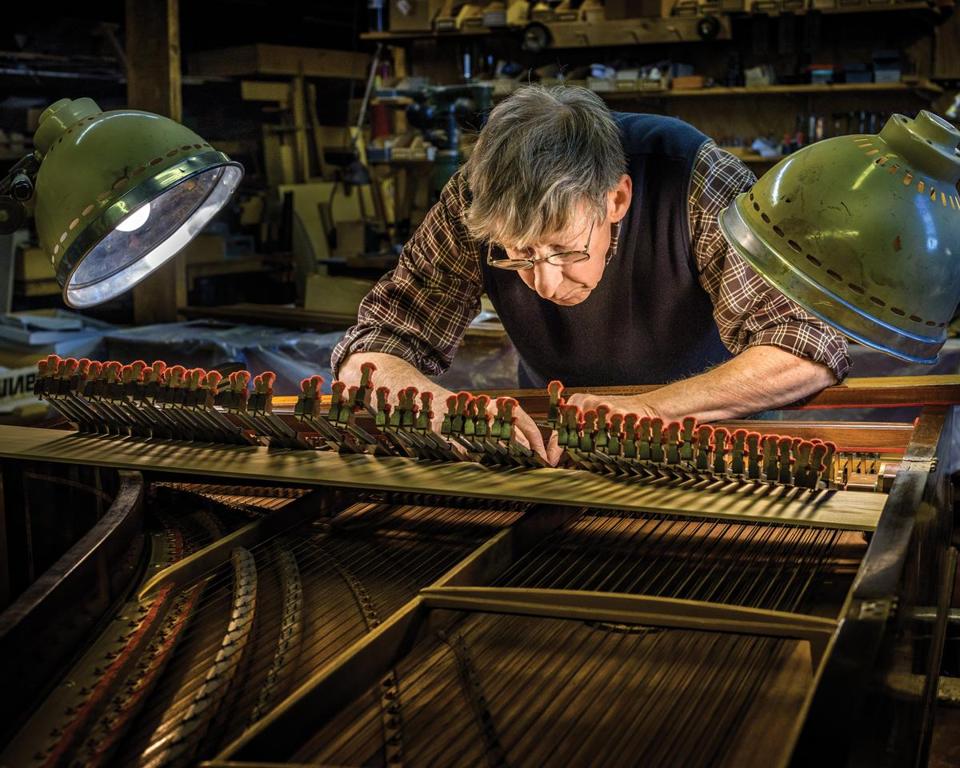 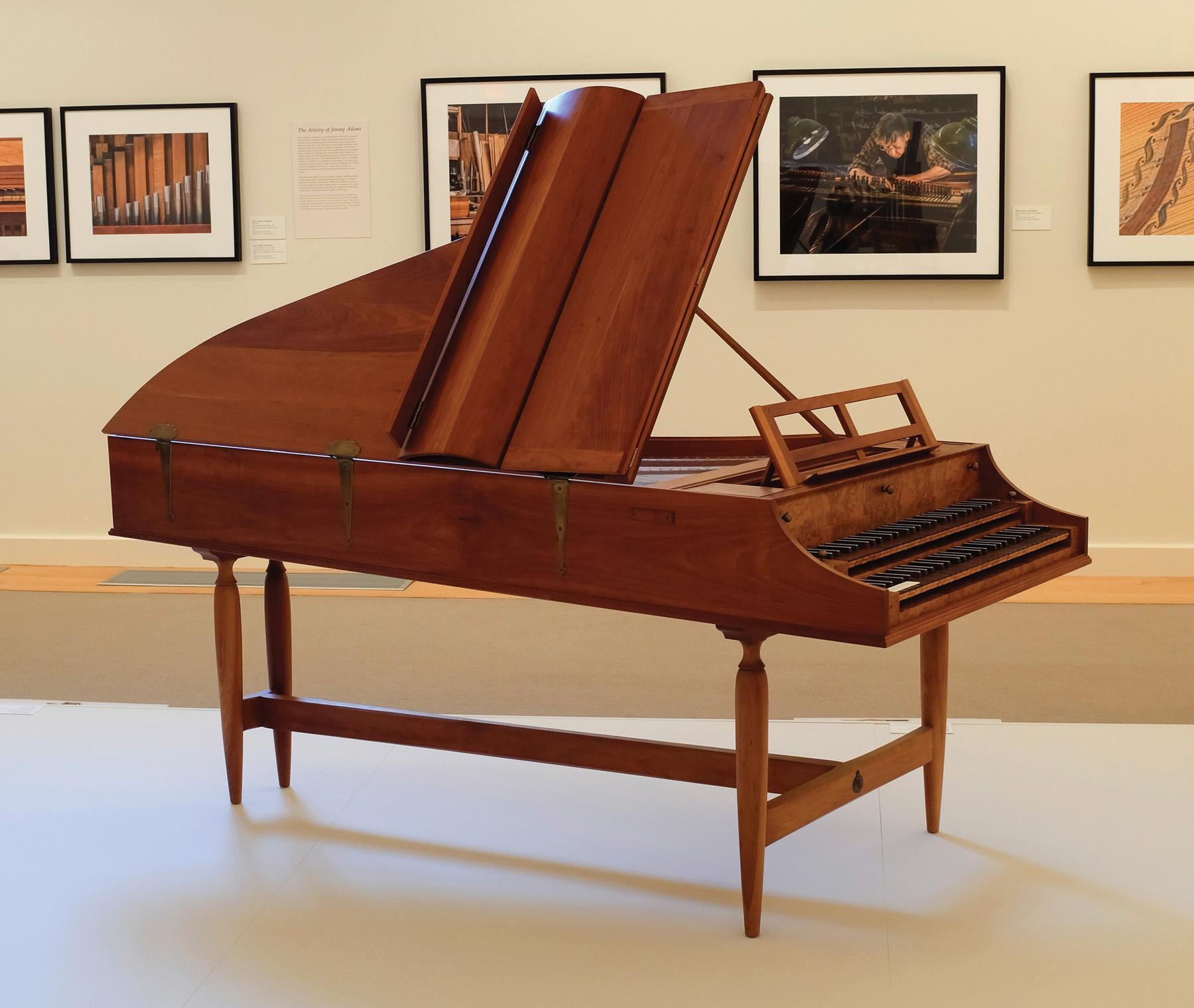 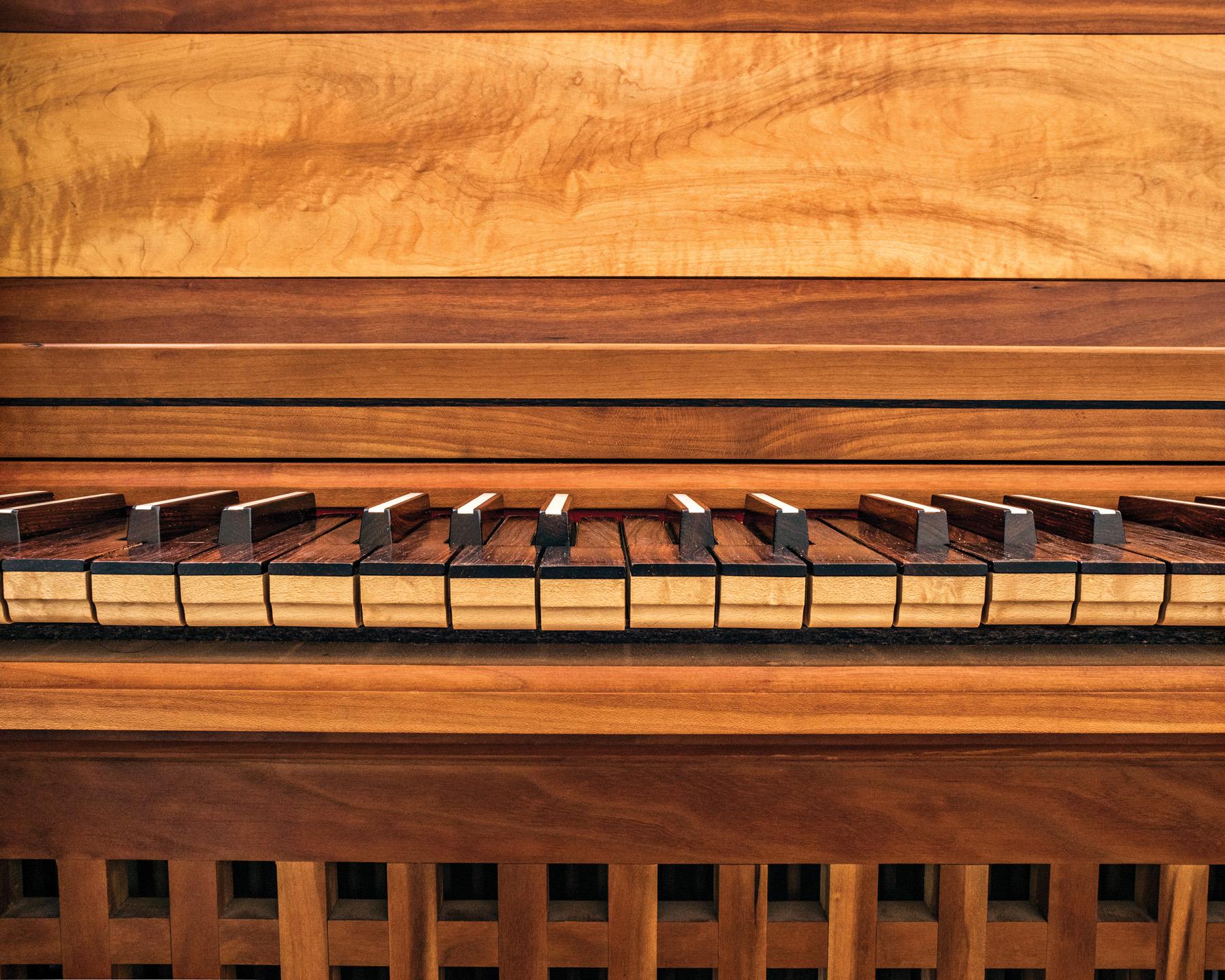 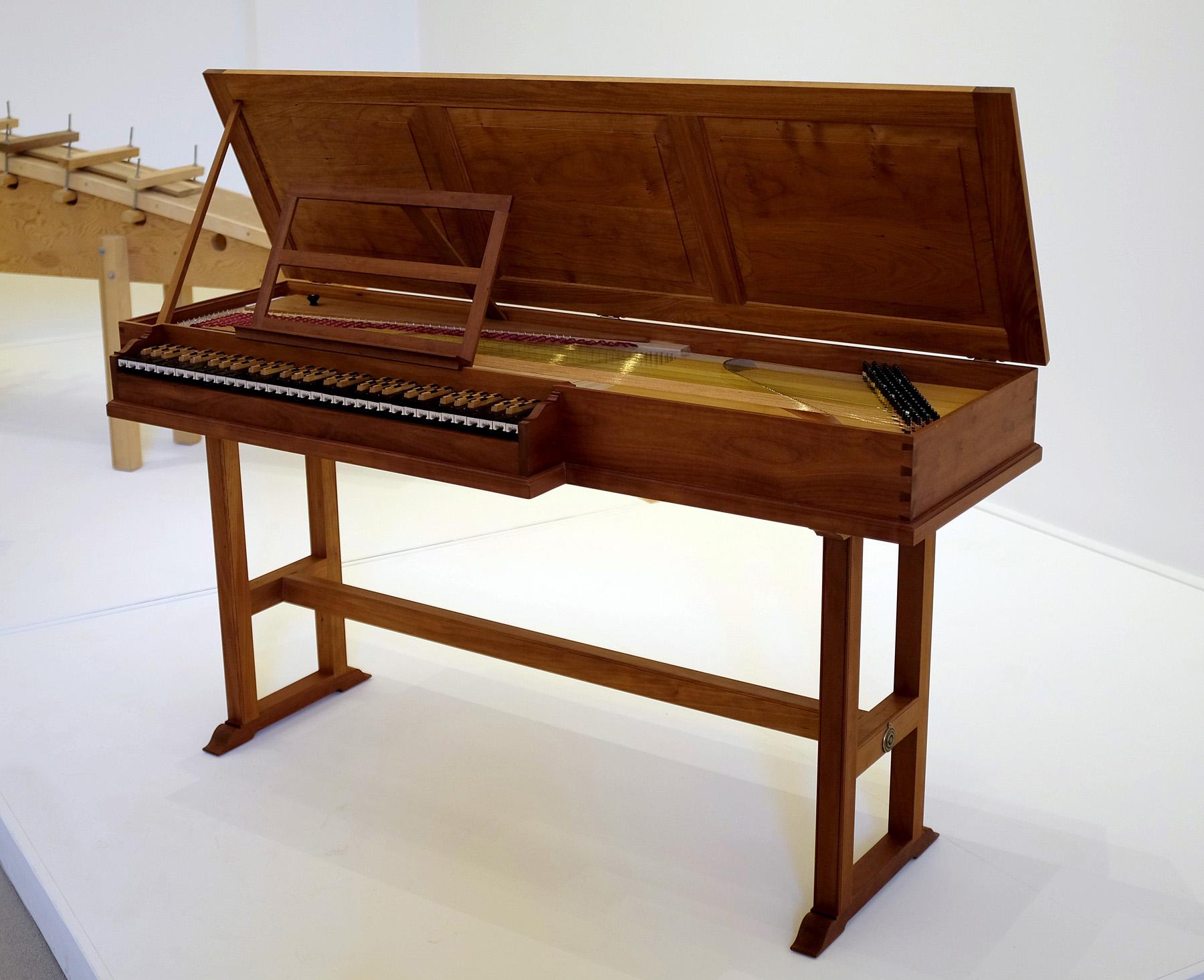